JUDGE REPRIMANDED FOR IMPROPER CONDUCT WHILE TRYING TO QUIET HALLWAY

TALLAHASSEE- Judge David C. Miller of the Eleventh Judicial Circuit was reprimanded for improper conduct while trying to quiet a crowded and noisy hallway outside his courtroom, during which he 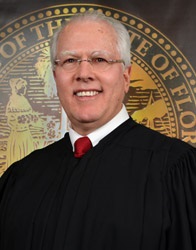 inappropriately threatened one court employee with contempt for shaking her head at him. Two other judges standing with the court employee stated that the employee did nothing that would justify contempt.

In accepting a Stipulation between the Judge and the Commission, the Supreme Court agreed with the JQC that a public reprimand is appropriate, writing, “Indeed, as the JQC notes, we have imposed a public reprimand in other instances involving inappropriate threats of contempt. See, e.g., In re Aleman, 995 So. 2d 395, 399-400 (Fla. 2008) (imposing public reprimand for judge whose conduct, which included an “unnecessary and harmful” threat of contempt, was determined to violate Canons 1, 2A, and 3B(4)). We recognize Judge Miller’s cooperation and otherwise unblemished career, and we trust that Judge Miller going forward will at all times act in a manner that promotes public confidence in the integrity of the judiciary.”

Finally, the Court noted that administrative measures should be undertaken to ensure that crowds outside of courtrooms do not disrupt judicial proceedings in the future.

The Supreme Court’s opinion can be found here.

Photo courtesy of the Eleventh Circuit.