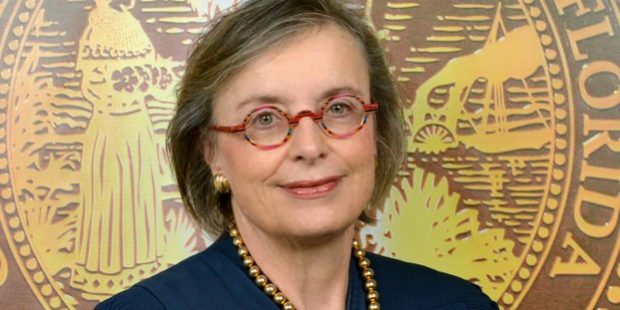 TALLAHASSEE- Five judges from the Eleventh Judicial Circuit in Miami-Dade County have been reprimanded by the Florida Supreme Court for improperly interfering in a contract procurement process being run by the Florida Department of Children and Families (DCF). Eleventh Circuit Judges Rosa Figarola, Marcia Caballero, Teresa Pooler, and Mavel Ruiz signed a letter originally drafted by Judge Cindy Lederman (pictured) advocating on behalf of a private company, Our Kids, Inc., which was one of only two companies bidding to become the Lead Agency for Community-Based Care for the Southern Region, a contract to serve as the primary services provider in South Florida for DCF, worth approximately $500 million over five years. The judges’ letter, addressed and transmitted to DCF during the procurement process, endorsed the private company, and concluded by stating, “We have worked with Our Kids and we have complete faith only in the Our Kids model of leadership. When you select the agency please keep our voices in mind.”

In a Stipulation with the Commission, the judges acknowledged that while they intended for the letter to be informational, it crossed the line into lending the prestige of judicial office to advance the interest of a private entity, and created the appearance of impropriety.

Photo courtesy of the Eleventh Circuit